Spring, the scent of blooming trees and amazing views. This combination makes the Petrin Gardens one of the most popular places for a romantic walk.


The Petrin Gardens, located on the Petrin Hill’s slope, are the largest green area in the center of Prague. It consist of several gardens such as Kinsky Garden, Rose Garden, Seminary Garden or Lobkowicz Garden. More or less hidden corners open the view of Prague Castle, opposite Old and New Town and you may also see the Nusle Bridge. To enjoy the best view of the surrounding area, you have to deserve it and climb the relatively high Petrin Hill. Or use the cable car.

The Petrin funicular connects the lower station Ujezd via the Nebozizek stop with the upper station Petrin. There is also located its control room. The railway is 510 meters long and the total elevation is 130 meters. The original cableway was put into operation in 1891 for the Jubilee Czech Exhibition (as well as the Industrial Palace at the Prague Exhibition Grounds or the Petrin Observation Tower). The two wagons of the funicular were originally powered by water – the upper wagon was loaded with water to pull the lower lighter wagon up. Over the years, the funicular has been out of order several times for a longer period. Whether it was during the war, due to electrification or reconstruction after landslides. It has been in its current form since 1985. The funicular is a part of the city public transport, you can use your standard public transport tickets here and it is possible to carry a bicycle.

The funicular railway runs through the Hunger Wall, built by Charles IV. in the 14th century as part of the city’s fortifications. According to a legend, he decided so to make a livelihood for the Prague’s poor citizens during the famine. The wall spreads out from Újezd to Strahov and was originally approaching Hradcany. It is 1178 meters long, 7.5–8 meters high and its width reaches almost 2 meters.

Petrin sights do not end with blooming orchards; you can also visit the Petrin Observation Tower, Mirror Maze or Stefanik Observatory. Another favourite place is the statue of Karel Hynek Macha by Josef Vaclav Myslbek, which proves the inherent connection of this place with romance.

“Late evening, on the first of May—

The twilit May—the time of love.

Where rich and sweet pinewoods lay.”

How to get to the view point Petrin Gardens 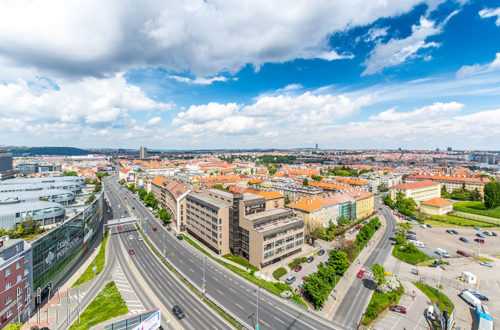