The Old Town Bridge Tower is deservedly considered a Gothic gem of European value. From its observation deck, you can watch the iconic sunset over Prague Castle.


The impressive Gothic building towering on the first pillar of Charles Bridge is located on the right bank of the Vltava River. The Old Town Bridge Tower is the most preserved and oldest part of Charles Bridge. Their construction began together in 1357. The tower served both as a fortification, as its gate could be closed with a sliding grille, but was also part of the Royal Route, which the future Czech kings passed through to their coronation.

Charles IV. had the Old Town Bridge Tower built together with Charles Bridge based on the design of architect and builder Petr Parler. This Gothic tower on Krizovnicke Square is an extraordinary monument of architecture and fine arts. Religious, symbolic and geometric aspects are used in the decoration of its eastern façade. It is certainly interesting for its sculptural decoration. The most significant elements are the highest statues of St. Sigismund and St. Adalbert and below them three statues from the left a statue of Emperor Charles IV., St. Vitus and King Wenceslas IV.

For the iconic Prague view, just climb up 138 steps to the gallery at a height of 47 meters. The reward will be a beautiful view of Prague Castle in the foreground with Charles Bridge. Ideally during a colourful sunset. On the opposite side of the bridge there is a second bridge tower, the Lesser Town Bridge Tower, on the left bank of the Vltava. However, the observation deck offers a view in all directions. You can enjoy, for example, the view of the various spires that surround Krizovnicke Square, which is dominated in the foreground by the huge green dome of the Church of St. Francis of Assisi.

How to get to the view Old Town Tower Bridge

See the map of all viewpoints.

Plan your visit of the Old Town Bridge Tower 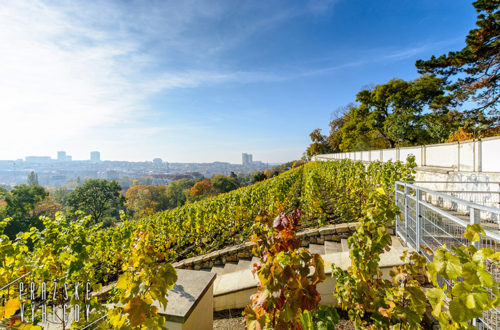